Now look here. I have ASKED for help and exactly none of you people have intervened in any way, shape or form. No one has hidden my wallet, no one has cut up my credit cards, no one has even sent me a strongly worded telegram. Hell, one of you (and I won’t mention any names, but her initials are Cocoa Black) even told me to get whatever I wanted.

So there’s this guy I ran across about a year ago, his name is John Backlund and he is an industrial designer with a taste for retro and the Jetsons. You can already tell I’m fucked, can’t you? John has designed a number of guitars which are figuratively “out-of-this-world”. They are very colorful, visually distinctive and look exactly like what George Jetson, his wife Jane, daughter Judy and his boy Elroy would play, assuming the Jetsons did a Partridge Family act and played gigs at Spacely Sprockets. 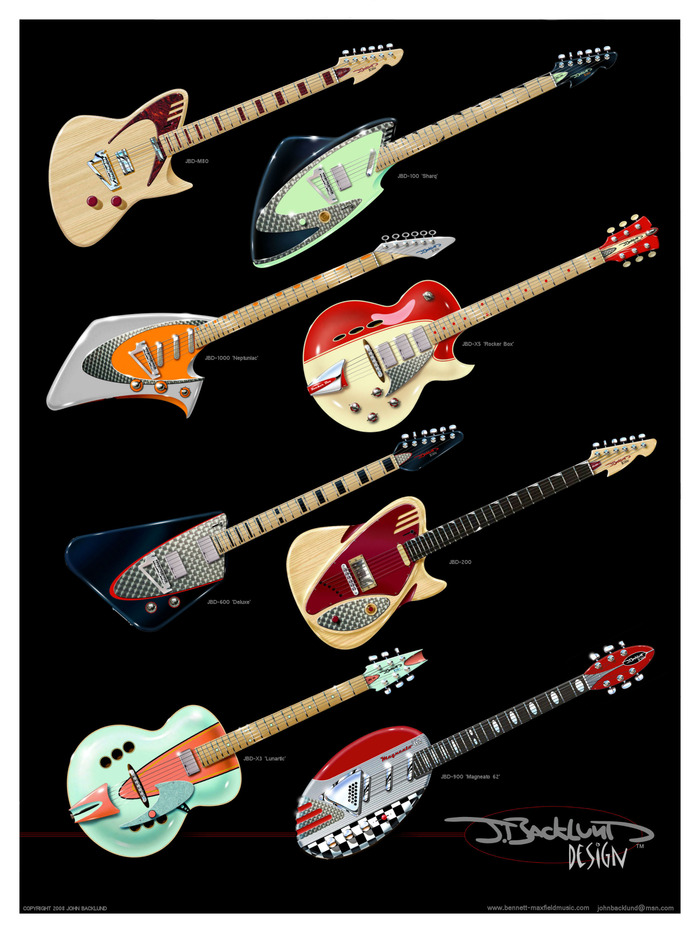 One of John’s designs really caught my attention; it was his “Marz 6” guitar. I knew it existed because it was in his family photo of the design prototypes he owns. 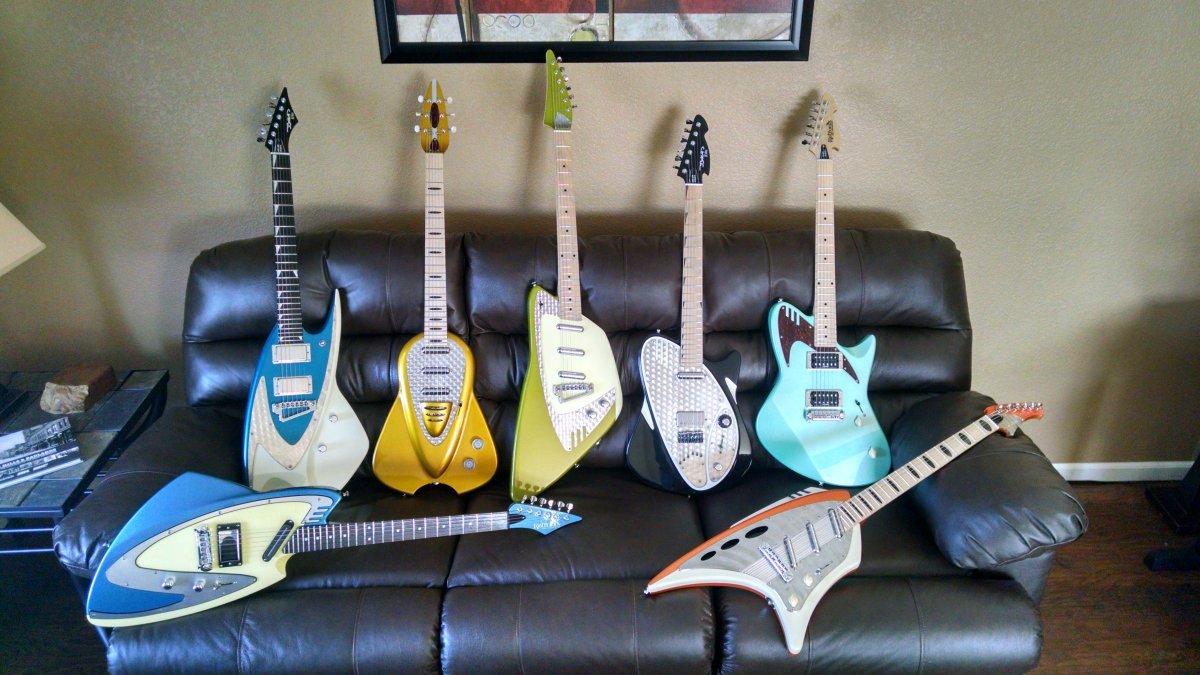 The Marz 6 is that golden beauty that is the 2nd from left upright guitar on the sofa. I contacted Mr Buckland and told him of my interest in his guitar and he responded very promptly, but not with any good news. He explained that the Marz 6 in the picture had been built for him by a Dutch luthier and it was the only existing Marz 6 in the galaxy. To say that I was disappointed would be an understatement, but I thanked Mr Backlund for his time and told him I would be interested in purchasing one should he ever sell the design to a manufacturer. You know what’s coming next.

On December 20th, John announced that Eastwood Guitars would be manufacturing a few of his designs. The Marz 6 was not listed among them on the Eastwood site, but John had posted on a guitar forum that the Marz 6 was going to be produced. I sent Eastwood a query on the subject and applied some serious search-fu and lo, a true Christmas Miracle occurred. The Marz 6 has a separate pre-order page not linked to the rest of John’s guitars, Eastwood is accepting deposits for Marz 6’s in various colors and for a mere two hunnit dollah you can nail down the color of your choice with anticipated delivery in April of  2018. TAKE MY MONEY NOW!

I advised John I had mine on order and he thanked me and advised… well, his exacts words were “Thank you! You’ll be getting what will probably always be quite a rare guitar. Of course, I would like to be wrong about this, but I would be surprised if more than fifty to seventy-five Marz 6 guitars will ever be built.”

So dear reader(s), thanks for nothing in helping me to stop buying guitars. Not that anything short of shooting me in the noggin would have stopped me from getting this one. The badass is just WAY too strong to resist.